In theory, the newly elected Republican House of Representatives should be working full speed ahead on the nation’s business. But because it’s taken so long to name a House speaker, it’s been delayed. Even so, Americans have a full agenda for Congress once it gets under way, the most recent TIPP Poll data show.

We asked Americans specifically what they wanted the new Congress to focus on during its first 100 days, the traditional time for a new group of lawmakers to unveil what their priorities and focus will be.

The list came from an online Golden/TIPP poll taken from Dec. 7-9 among 1,094 registered voters and having a +/-2.9 percentage point margin of error. It asked voters a simple question: “What do you want the Republican House of Representatives to focus on in the first 100 days?” Respondents were then given 15 possible answers.

Here are the top five:

The middle five show the public is in something of an investigative mood: 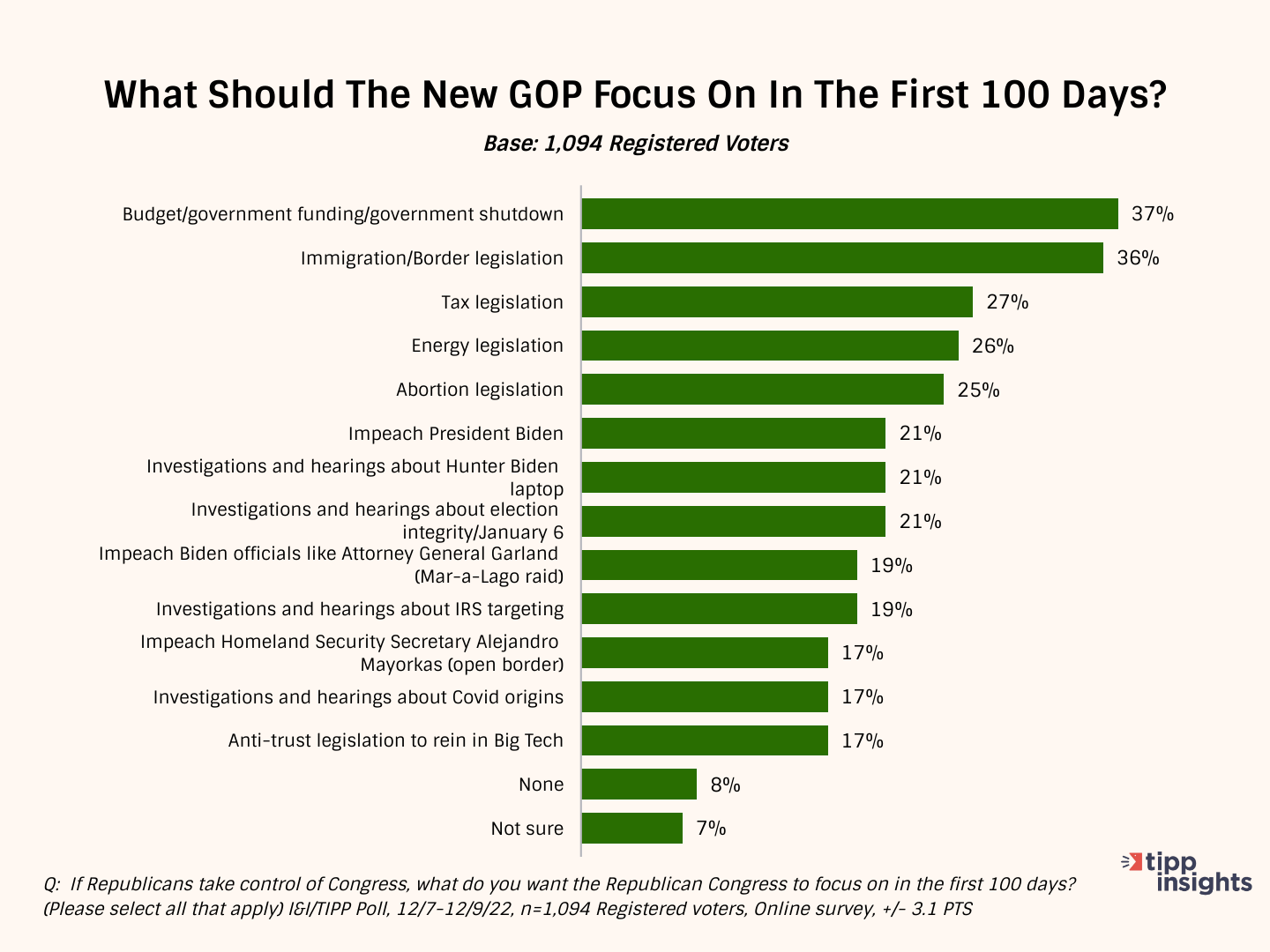 What are we to make of all this? For one, Americans of all political stripes appear to have few things they desperately want the new Congress to take up. There’s a low-level consensus on a handful of items, but that’s about it.

Indeed, among all the possible priorities listed, none got a majority of Democrats, Republicans or independents, with one major exception: 56% of Republicans say they want immigration or border legislation passed. No other issue gets over half.

Even so, the border issue also struck a chord with independents, though not a majority, with 42% saying they wanted legislation, while just 18% of Democrats did.

This perhaps explains President Joe Biden’s sudden decision in early January to visit the U.S.-Mexico border for the first time during his presidency, after heavy criticism from conservatives and Republican Party regulars for ignoring the border problem.

Biden himself might be another target for the GOP. About 39% of Republicans responding to the poll want Biden impeached, while another 36% want Hunter Biden’s lost laptop investigated for what it might show of Biden family corruption.

But certainly, the budget is an area of potential major conflict. Since the poll was taken in December, the Democratic-led Senate approved a $1.7 trillion omnibus spending bill, but did so with the aid of Senate Minority Leader Mitch McConnell and 17 Republican senators.

Senators face voters every six years, while for House members it’s every two years. That means senators have the luxury of hoping the voters forget what they did between elections; representatives don’t.

The new Republican Congress will likely look to do something, anything, to slow the spending juggernaut, knowing full well that it is the most popular item among their own supporters. The anger among House Republicans against members of their own party in the Senate who supported the massive new spending bill is palpable.

One reason to look for action on these and other issues of interest, even without overwhelming support, is the recent battle over who should be the speaker of the House. It took an unprecedented 15 votes for moderate California Republican Rep. Kevin McCarthy to win the speakership, but in doing so he had to make lots of promises to furious Republican conservatives.

Why the anger against McCarthy? The $1.7 trillion omnibus spending bill in the Senate was the last straw for many.

As Roll Call, the mostly centrist publication covering Washington, D.C., politics and policy, described it: “It not only covers the dozen annual spending bills for every federal agency, plus supplemental aid for the war in Ukraine and natural disaster victims, but also an extensive set of unrelated policies such as horseracing industry rules and a TikTok ban on government-issued devices.”

McCarthy will have a short leash with distrustful conservatives of his own party.

As Roger Kimball, writing for American Greatness, described McCarthy, in words echoed by many:

He was only too happy to shovel billions of your and your children’s money to Ukraine while doing little to secure our southern border. McCarthy is from California, so, naturally, he likes to spend money. He even got behind such improvident and mendacious schemes as raiding Medicare to pay for the U.S. Postal Service. He was happy to fund the Jan. 6 kangaroo court, grant amnesty to illegal immigrants, and support mandates for the useless — indeed, dangerous — COVID vaccine for the military. In plain terms, his voting record is only intermittently conservative.

In response to his opposition within the GOP, McCarthy made specific promises, among them: A rule change to let one representative move to get rid of a House speaker; formation of a panel modeled on the 1970s-era Church committee to look into abuses by the CIA, FBI and other intelligence agencies against U.S. citizens; assignment of three members of the conservative Freedom Caucus to posts on the powerful nine-member Rules Committee; a vote on term limits for Congress, and votes on a balanced-budget and a stringent Texas Border Plan, among other items on conservatives’ wish lists.

All in all, the conservatives within the party have shifted the center of power from left to right. With the Senate in Democrats’ hands, few major initiatives are likely to make it to Biden’s desk for signing. But make no mistake: With McCarthy’s difficult ascension to the speakership, the first salvo of the 2024 election campaign has been sounded.

I&I/TIPP publishes timely, unique and informative data each month on topics of public interest. TIPP reputation for polling excellence comes from being the most accurate pollster for the past five presidential elections.

Rules for Comments: Getting comments posted on this site is a privilege, not a right. We review every one before posting. Comments must adhere to these simple rules: Keep them civil and on topic. And please do not use ALL CAPS to emphasize words. Obvious attempts to troll us won’t get posted. Cancel reply

This site uses Akismet to reduce spam. Learn how your comment data is processed.