In recent years, government in the U.S. has never been bigger, in terms of both spending and its power over individuals and the economy. Some have begun to openly wonder: Is the U.S. evolving into a socialist-style economy? And is that what Americans want? The latest I&I/TIPP Poll has answers.

Over the last three years, due to the COVID pandemic, government spending at all levels averaged just over 44% of GDP, the highest since World War II, when much of the economy was essentially socialized in order to boost war spending.

Today, a majority of Americans agree that the sudden, rapid growth from COVID-related spending and burgeoning top-down control over the domestic economy to address climate change have put U.S. on a path toward socialism.

This comes out of the latest I&I/TIPP Poll of 1,356 Americans across the country, taken online from Jan. 4-6. In it, we asked respondents whether they agreed or disagreed with the following simple statement: “The U.S. is evolving into a big government socialist state.”

The shocking answer: By 51% to 31%, Americans agreed the U.S. is moving toward socialism. Among the remainder, 18% said they were “unsure.” The poll has a margin of error of +/-2.8 percentage points.

Further broken down, of those who agreed, 20% said they did so “strongly,” while 31% said they agreed “somewhat.” For those who disagreed, just 15% disagreed strongly, while 16% said they “somewhat” disagreed.

While usually such politically sensitive questions show wide differences among the different political affiliations, that’s not exactly the case here. 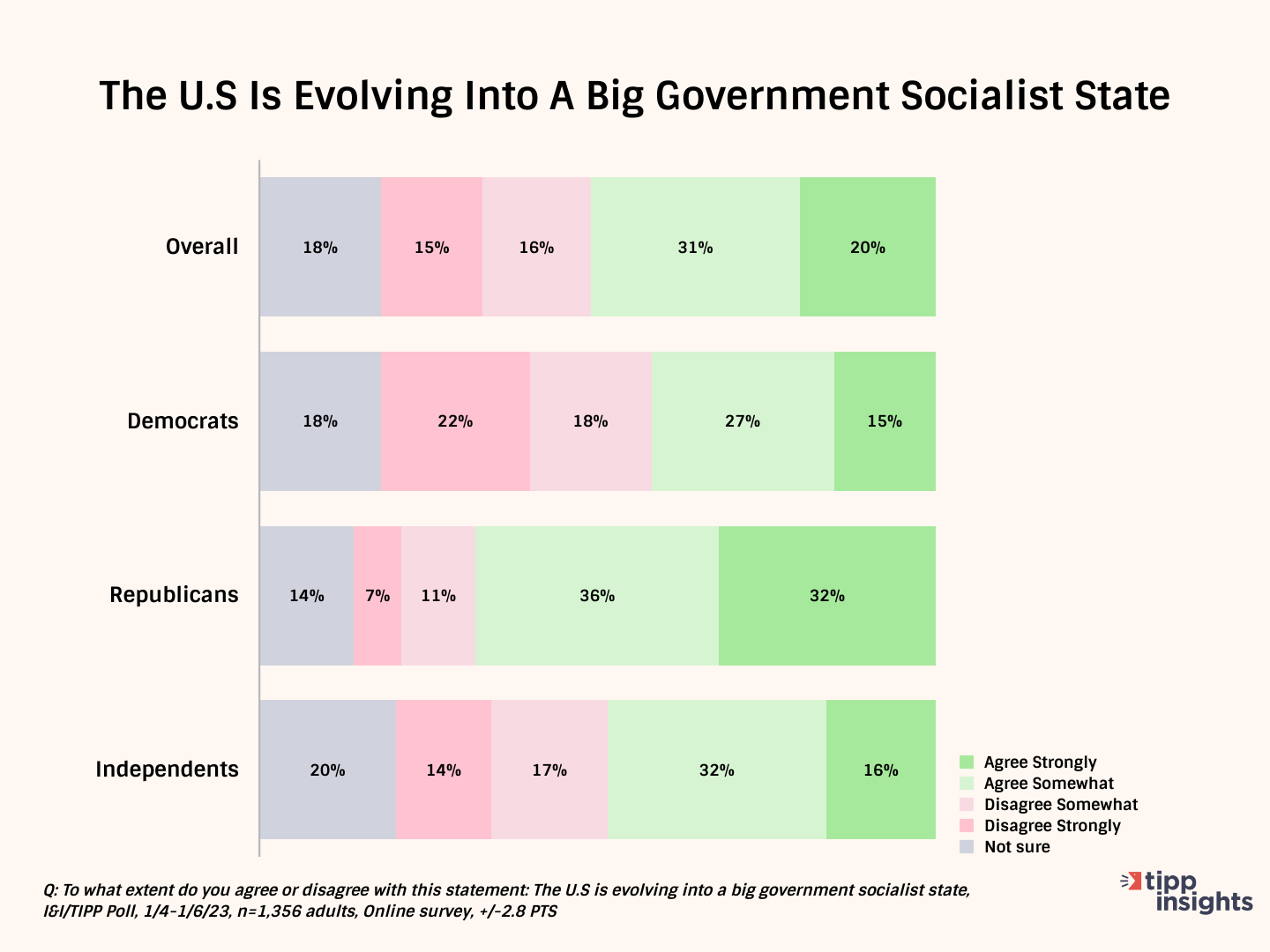 We asked two other related questions, one about spending, the other about direct government control of key sectors of the economy. Poll participants were to indicate whether they agreed or disagreed with a statement: “I am willing to pay higher taxes to support more social programs.”

Again, the gap was large. Among those answering, 57% said they weren’t willing to pay higher taxes for more social programs, while just 34% said they were. 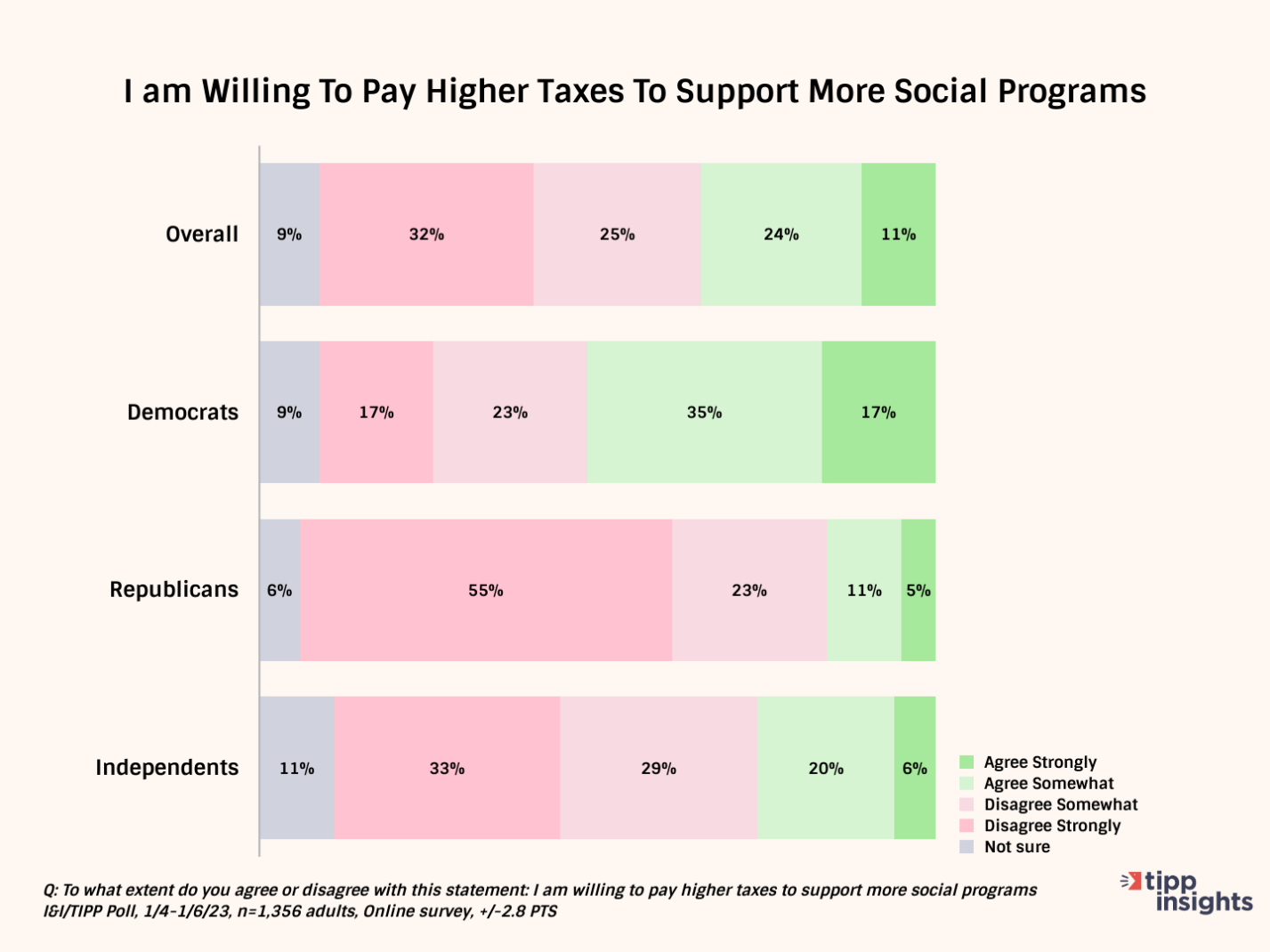 A third, and final, question was asked: Did respondents agree or disagree that “the government should control or own key industries such as health care and energy.”

Here, the margin was narrower, with 39% of all respondents saying they would support such a move, while 46% said they would not. “Not sure” made up 14% of the responses.

Once more, the political split was wide, with 55% of Democrats supporting vs. 30% opposing, compared to 26% of GOP followers supporting the takeover of major industries, compared to 64% opposing it. Independents expressed 32% support, vs. 53% opposition. 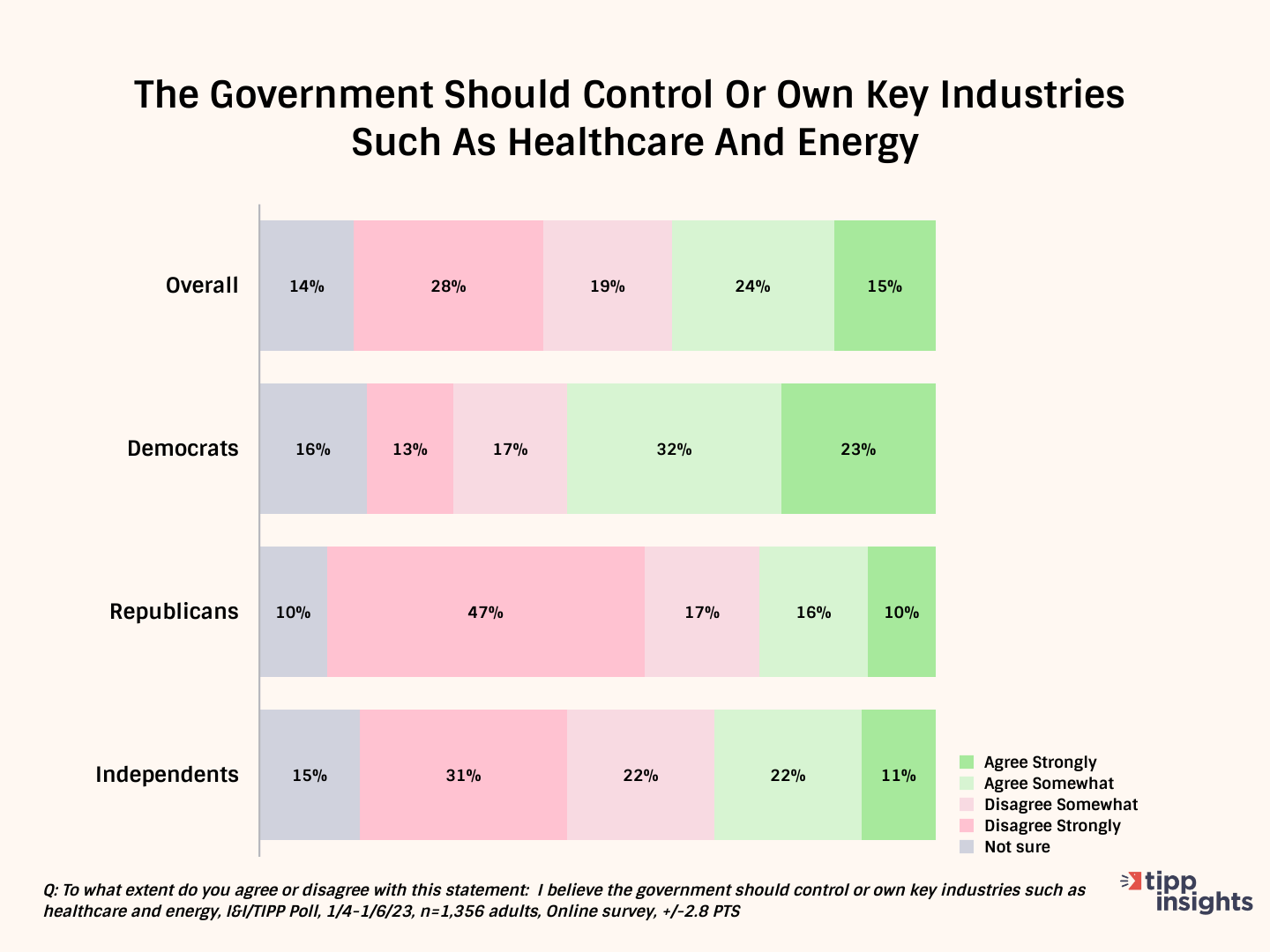 What to make of all these data?

For one, even as government’s size, tax-take and power over the private economy have expanded, Democrats mostly don’t see America moving toward socialism. Americans of other political persuasions mostly do.

For another, Democrats are far more likely to support both higher taxes for social spending and the takeover of key industries. Once again, Republicans and independents aren’t.

In short, while Democrats are less likely to see the U.S. evolving into a socialist state, they support higher taxes for “social programs” and the takeover of major parts of the economy, both hallmarks of socialist economics.

This is likely to form the basis of future bitter policy disputes between the White House and the major parties in Congress.

Consider just the two industries mentioned in the I&I/TIPP poll: health care and energy. Together, they account for roughly 25% of all U.S. GDP. A government takeover would essentially push total state and federal government control to well over half of the entire economy.

President Bill Clinton in 1996 pledged, “the era of big government is over.” But is big government now making a comeback? To many, it sure feels that way, as our poll shows.

Americans, as I&I/TIPP Poll data show, are less than keen on paying taxes to fund more social programs. And yet, with little fanfare, some $219 billion in new taxes went into effect on Jan.1, before the new Congress could take over.

Such moves are sure to set off yet another stormy debate in Congress (not to mention among the public), over the degree of government control over Americans’ lives.

I&I/TIPP publishes timely, unique and informative data each month on topics of public interest. TIPP reputation for polling excellence comes from being the most accurate pollster for the past five presidential elections.

Rules for Comments: Getting comments posted on this site is a privilege, not a right. We review every one before posting. Comments must adhere to these simple rules: Keep them civil and on topic. And please do not use ALL CAPS to emphasize words. Obvious attempts to troll us won’t get posted. Cancel reply

This site uses Akismet to reduce spam. Learn how your comment data is processed.

This website uses cookies to improve your experience while you navigate through the website. Out of these, the cookies that are categorized as necessary are stored on your browser as they are essential for the working of basic functionalities of the website. We also use third-party cookies that help us analyze and understand how you use this website. These cookies will be stored in your browser only with your consent. You also have the option to opt-out of these cookies. But opting out of some of these cookies may affect your browsing experience.
Necessary Always Enabled
Necessary cookies are absolutely essential for the website to function properly. These cookies ensure basic functionalities and security features of the website, anonymously.
Functional
Functional cookies help to perform certain functionalities like sharing the content of the website on social media platforms, collect feedbacks, and other third-party features.
Performance
Performance cookies are used to understand and analyze the key performance indexes of the website which helps in delivering a better user experience for the visitors.
Analytics
Analytical cookies are used to understand how visitors interact with the website. These cookies help provide information on metrics the number of visitors, bounce rate, traffic source, etc.
Advertisement
Advertisement cookies are used to provide visitors with relevant ads and marketing campaigns. These cookies track visitors across websites and collect information to provide customized ads.
Others
Other uncategorized cookies are those that are being analyzed and have not been classified into a category as yet.
SAVE & ACCEPT
Get I&I Delivered Right to Your Inbox!

You can get hyperbolic, hysterical, historically ignorant, or just plain dumb commentary anywhere.

If you want opinion grounded in facts, guided by logic, informed by wisdom that comes with age, this is the place to be.

The I&I team has more combined journalism experience than any other opinion site in the world. And it shows. Every day.

Sign up here to get daily or weekly I&I Alerts delivered right to your e-mail box!