As a new year begins, Americans are having second thoughts over China’s expanded global role after its recent saber-rattling, President Xi Jinping’s creeping authoritarianism and the country’s questionable COVID-19 policies. With global companies now preparing themselves for an uncertain year, the I&I/TIPP Poll asked Americans whether U.S. businesses should be pulling back from China. The answer: a resounding “yes.”

Specifically, I&I/TIPP asked Americans whether they agreed or disagreed with the following statement: “American companies should do more to stand up to China, even if it hurts their businesses.” The online poll of 1,351 adults was taken nationwide from Dec. 7-9, with a +/-2.8 percentage point margin of error.

Sentiment was strong across the board, even among different political factions. Overall, 69% agreed American businesses should do more to stand up to China, even if they’re hurt by doing so. Just 16% disagreed, while 15% called themselves unsure. 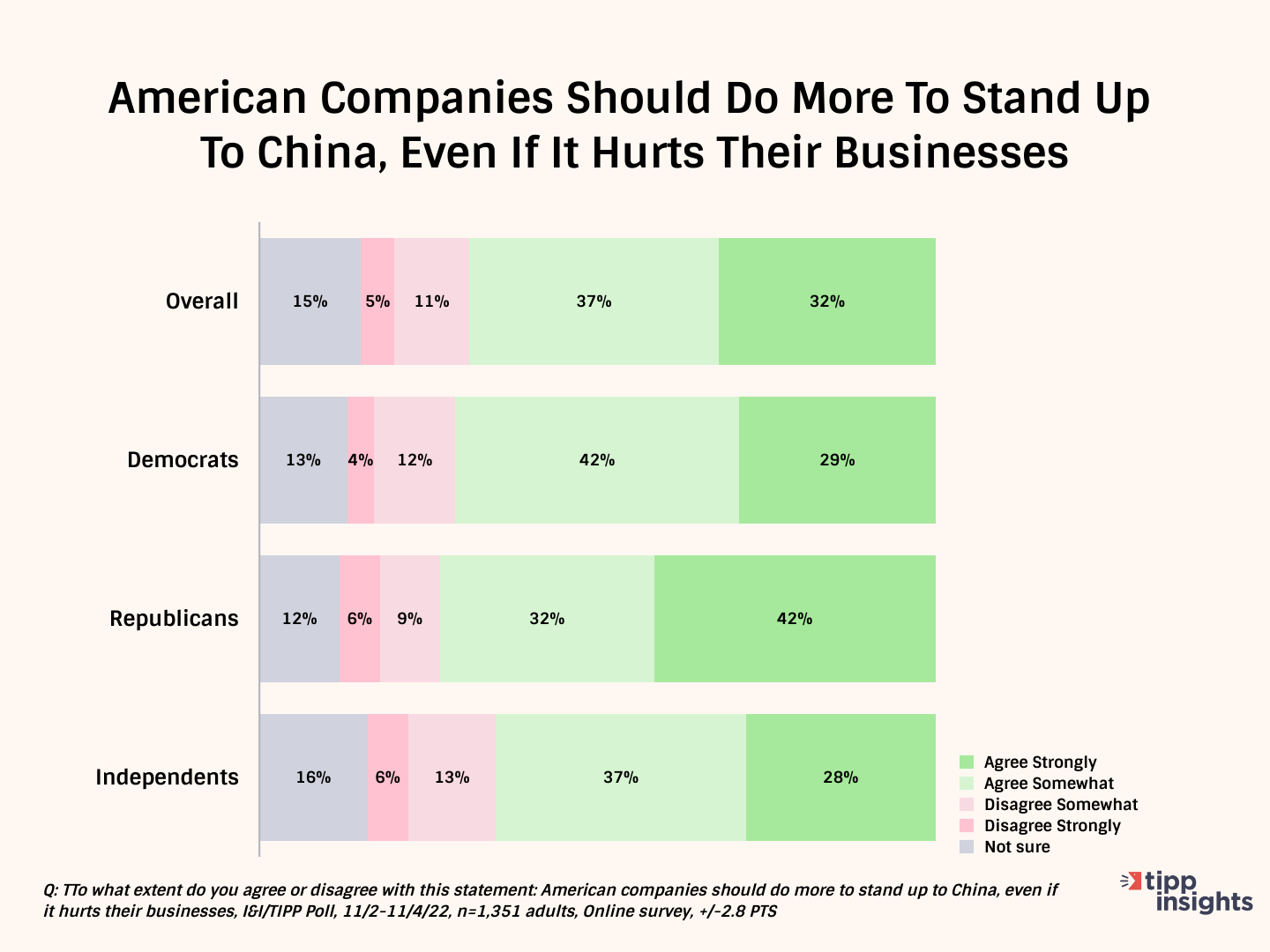 The I&I/TIPP data often show stark political differences among the major parties on questions. But not this one.

Most demographic groups, likewise, showed strong agreement. But there were some surprises.

It might seem logical that investors and wealthier Americans, recognizing the economic costs of disengaging from China (the country holds just under $1 trillion in U.S. federal debt, after all), would be less likely to support anything that might hurt profits, prices or investments. But that would be wrong.

As for investors, 81% of those with money on the table agreed, versus non-investors at about 65%. 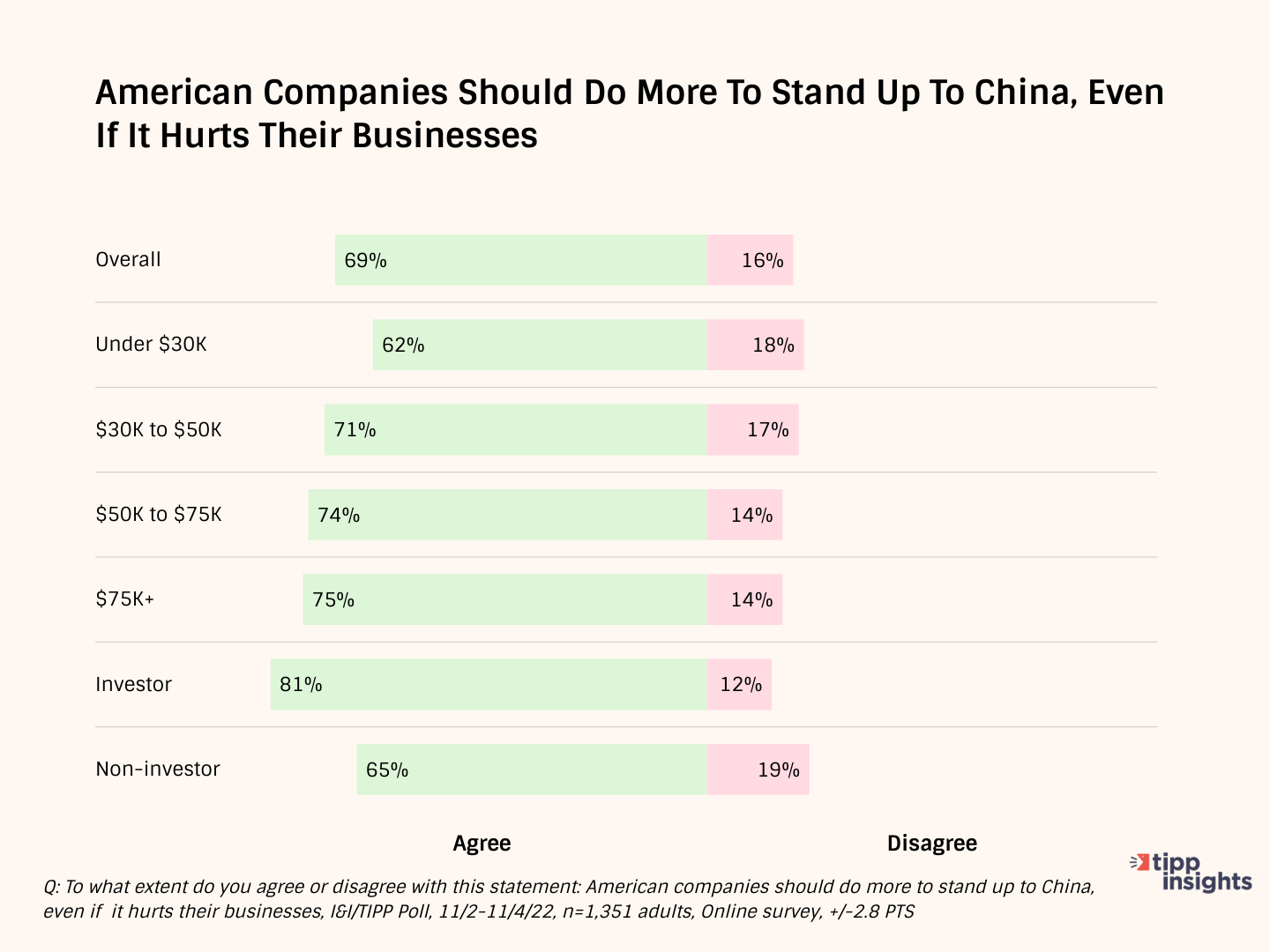 The point is, there’s a strong sentiment across the board for backing away from our former robust presence in China’s economy. And U.S. companies are already doing it.

Whether the trend gathers pace will depend largely on China’s future policies under communist hardliner Xi Jinping. So far, the outlook is not promising.

China has used its $300-billion-plus yearly trade surpluses from the U.S. to build a 2 million man military and blue-water navy capable of projecting Chinese might around the Pacific. Its neighbors, including South Korea, Japan, the Philippines, Thailand, Vietnam, Singapore, Indonesia, Australia and New Zealand have been put on notice.

That threat has been underscored by recent alarming reports from the Defense Department and others of China’s plans to become a global “nuclear superpower.” Its construction of aircraft carriers and its new H-20 stealth bomber, are similarly of concern.

But there’s more than just a military concern. The “standing up” to China in our question presupposes that Beijing, in addition to violating international norms in how it treats its own citizens, has been bending the rules of international trade, investment and intellectual property for decades with very little pushback.

For the longest time, foreign companies assumed that producing in China was a slam-dunk win, with ultra-low costs, a captive workforce, and 1.2 billion potential domestic consumers. China’s cheap and plentiful production of goods and services played a large part in keeping U.S. inflation near 2% from the 1990s until 2020.

No longer. Like it or not, U.S. companies are part of America’s increasingly hard line against China’s communist regime.

Apple, for instance, has confirmed that it’s diversifying its Chinese operations to friendlier neighbors such as India and Vietnam.

“While the move has been planned for months, after shifting COVID-19 policies enacted by the Chinese Communist Party first began to threaten production earlier this year, sources told the Journal that recent uprisings at the Zhengzhou plant are propelling Apple into action,” Business Insider reported.

Meanwhile, Taiwan Semiconductor, the largest chipmaker in the world, is now building a state-of-the-art plant in Arizona as threats of a Taiwan-takeover by mainland China grow.

Others are also moving to reduce their investment exposure in China. COVID problems helped accelerate the trend in recent years, with Apple’s Taiwan-based supplier Foxconn moving some operations to India, toymaker Hasbro moving factories to Vietnam and India, and Nintendo relocating some operations across Southeast Asia.

They’re not alone. A mid-2022 survey by the American Chamber of Commerce in China found:

In 2021, the State Department outlined the increasing troubles faced by U.S. companies in China, among them: (O)wnership caps and requirements to form joint venture partnerships with local Chinese firms, industrial policies such as Made in China 2025 … as well as pressure on U.S. firms to transfer technology as a prerequisite to gaining market access … (And) an increasingly assertive Chinese Communist Party and emphasis on national companies and self-reliance has heightened foreign investors’ concerns about the pace of economic reforms.”

Similarly, China’s mistreatment of, and human rights denial for, religious groups and non-Han ethnic minorities have raised serious questions about its attempts at becoming a global leader. As the I&I/TIPP poll shows, if American companies reduce their exposure to China in 2023, they’ll get little pushback from the American public.

I&I/TIPP publishes timely, unique and informative data each month on topics of interest. TIPP’s reputation for polling excellence comes from being the most accurate pollster for the past five presidential elections.