We’ve been predicting that with Democrats controlling all of the levers of government again – they would sprint way past their mandate from voters as they did when both Clinton and Obama were elected.

We just didn’t think it would happen so quickly.

After their lunatic vote to impeach Trump of Russia collusion – you know, the hoax – they might have been chastened. Instead, every Democrat in the House voted yesterday to re-impeach. EVERY LAST ONE!

The smart move would have been to censure Trump, and have him leave office next week disgraced. That didn’t happen because our sources tell us Pelosi believed the vote would split the GOP down the middle. It didn’t. Pelosi’s gambit was so heavy-handed that in a strange way she unified House Republicans. Just 10 Republicans voted for impeachment.

And for what? There was never any chance that the Senate could conduct a trial before Trump leaves office. We think it’s unlikely that there will ever be a Senate trial.

The real goat here was Biden. He could have taken the high road and told Democrats to cease and desist. Instead, he was AWOL. That “unity” message the President-elect has been touting lasted about 72 hours.

2) Manchin to the Rescue?

Well, at least there might be…count em, ONE, sensible Democrat in Congress. Senator Joe Manchin of West Virginia is the key swing vote in a 50 to 50 Senate and he is letting it be known he’s not an automatic vote for either side.

Last week, he frustrated many Democrats by indicating his opposition to providing $2,000 stimulus checks to Americans already receiving aid.

“How is the money that we invest now going to help us best to get jobs back and get people employed? And I can’t tell you that sending another check out is gonna do that to a person that’s already got a check,” Manchin told the Washington Post.

What will help the economy in Manchin’s estimation?  “Getting people vaccinated, that’s job No. 1.”

3) Poor and Minorities Clobbered By Lockdowns

We at CTUP have been making the point for many months that no policy in modern American history has done more to hurt minorities and to exacerbate income inequality than the ineffectual pandemic lockdowns by Democratic governors.

Earlier this week the Wall Street Journal confirmed that we have been right all along. The headline reads:“Job Losses in 2020 Were Worst Since 1939, With Hispanics Blacks, Teenagers Among Hardest Hit” 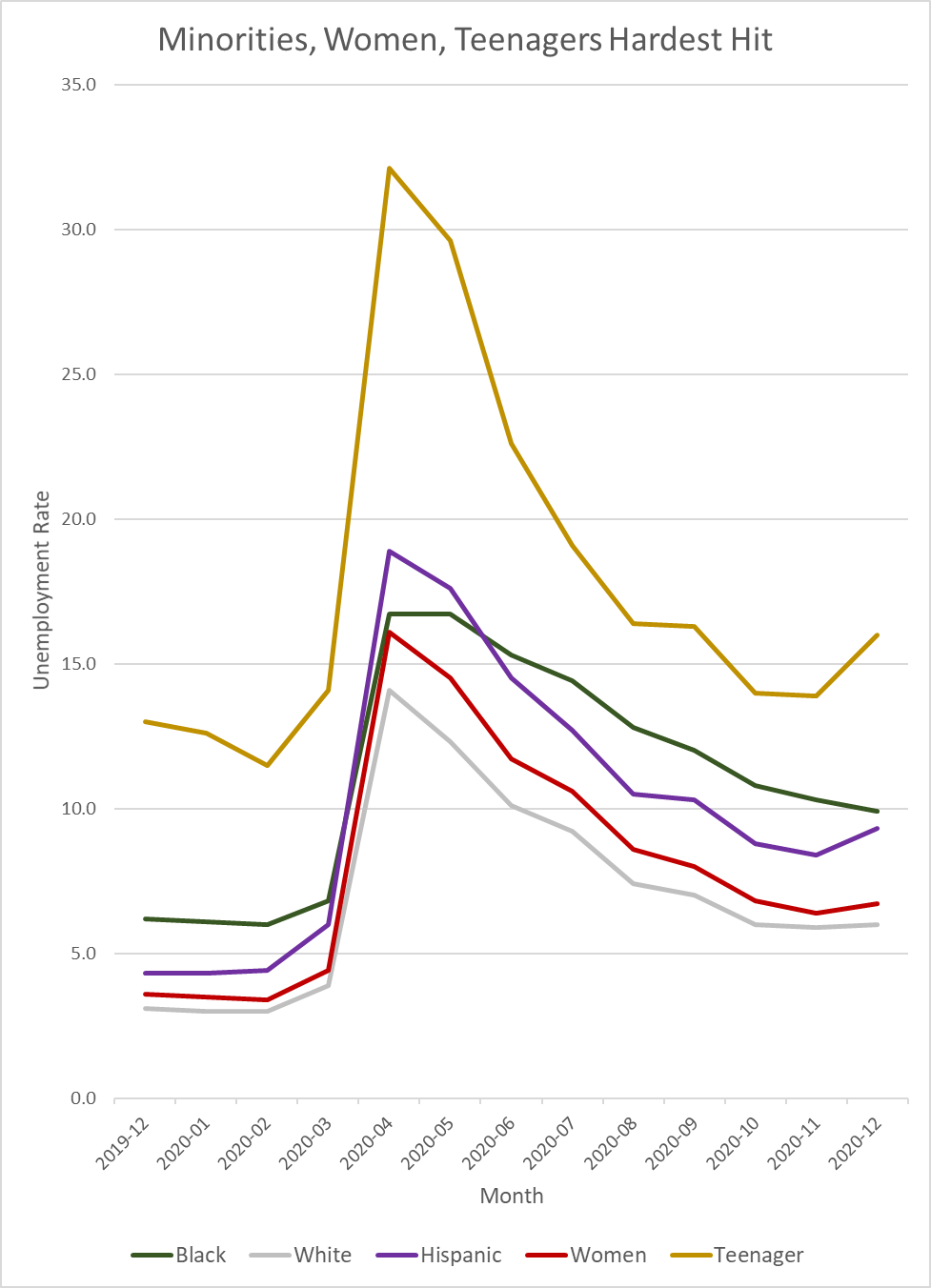 Here is the WSJ analysis:

“Unemployment among Black and Hispanic workers has significantly exceeded the national average throughout the pandemic. In December, the rate for Hispanics rose to 9.3% from 8.4% a month earlier. Hispanics accounted for about 18% of all workers and 28% of food-preparation workers in 2019.”

“Before the coronavirus hit, the Black unemployment rate, at 6% in February 2020, was near the lowest since records began. It nearly tripled to 16.7% in May, as many African-Americans are more likely to work in jobs that can’t be done remotely.”

We hope everyone will remember this when Democrats start pontificating in a few weeks about income inequality and racial disparities.

4) It Really IS the China Virus

The evidence keeps piling up that the Beijing government is engaged in a gigantic coverup of the origins of the Coronavirus.

This month U.S. officials made it known they’ve concluded the “most credible” explanation for the virus’s origin is that it escaped from a top-secret Chinese lab. China also recently delayed travel permission for a World Health Organization team to visit and investigate the virus. The team had already agreed not to examine the top-secret Wuhan Institute of Virology.

Now Britain’s Mail on Sunday has revealed that details of more than 300 studies carried out by the Wuhan facility are no longer available to researchers.

Among the deleted research are studies conducted by Shi Zhengli, the Wuhan-based virologist who has earned the nickname Batwoman for her efforts to look at how bats can transmit viruses.

Iain Duncan Smith, a former leader of Britain’s Conservative party, told the Mail on Sunday that “China is clearly trying to hide the evidence. It is vital that there is a thorough investigation into what happened but China seems to be doing all it can to stop that happening.”

But don’t worry. We’re sure China-apologist Joe Biden will be hot on the case.

5) AOC’s Plan: ‘Liberate’ Trump States So They Can Become Poorer

New York Rep. Alexandria Ocasio-Cortez has decided that the only way the nation can come together in the aftermath of the Capitol riots is for the states that voted for Donald Trump to be “liberated.”

AOC told her audience during a live Instagram interview this week that red states are “suppressed states, which means the only way that our country is going to heal is through the actual liberation of southern states.”

Hmmm. Does she mean by force? An armed invasion?We have a simple question. If so many of her fellow New York residents are fleeing their already “liberated” state by the hundreds of thousands, what is the point of “liberating” the states they are fleeing to?

We know what she has in mind. The Democrats want to make all of the rest of the nation adopt the job-killing policies that have crippled New York.

As we have repeatedly reported, New York is the only state that does not report the number of nursing home residents who have died with coronavirus, instead reporting only the number who died on the premises of the facility. We estimate the real number is two or three times the reported number, because most residents who are severely ill are transferred to hospitals.

Back in the summer Cuomo and his health commissioner, Howard Zucker — on the hot seat for forcing highly infectious patients into nursing homes — were pressed for the real number by the media, Congress, and state legislators. They insisted that it would take them months to prepare the data but they would release — after the election.

Their new timeline? How’s never? Per the New York Post:

The DOH spent months claiming it would turn the info over once it had been vetted for accuracy, then switched to declaring that honoring the FOIL requests “would constitute an unwarranted invasion of personal privacy” as a sharing of confidential “interagency or intra-agency materials” prohibited by the New York Public Officers Law.

Sooner or later, the full truth will come out, and this effort to hide it will only add to the scandal. Cuomo is basically guaranteeing that he’ll go down in history as the governor who mistakenly doomed thousands to a horrible premature death — and then intentionally did all he could to cover it up.

7) Yet Another Beloved Victim Of Lockdowns

Now Washington D.C. has lost the Capitol Steps, a highly popular satirical comedy group that has lampooned D.C. politicians for nearly 40 years. “We’re kind of in the same boat with an awful lot of entertainers and live performance groups that just can’t survive without shows and income coming in,” mourned manager Mark Eaton. “So that’s why we had to make the tough decision.”

The Capitol Steps were founded by Congressional staffers who moonlighted from their day jobs. Because its founders were bipartisan, both conservatives and liberals felt the sting of their songs over the years. Their absence from the DC scene comes at a time when people inside the Beltway need a laugh more than ever.

8) Our Kind of Stay at Home Order 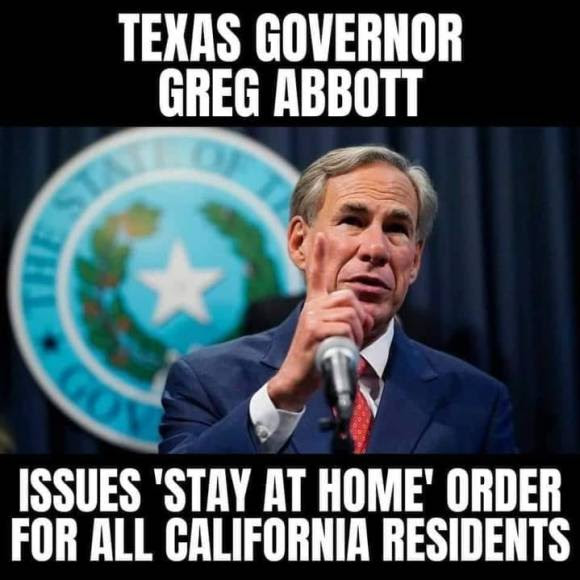 Know anyone else who would appreciate the Hotline?  Please direct them to subscribe at: https://committeetounleashprosperity.com/hotline/

Have an idea for an item that should be in our newsletter? Send us any charts, statistics, heroes/villains, or humor that you’d like to see featured!

A Mask Too Far

Help us fight for honesty in journalism and against the tyranny of the left. Issues & Insights is published by the editors of what once was Investor's Business Daily's award-winning opinion pages. If you like what you see, leave a donation by clicking on the Tip Jar image above. You can also set up regular donations if you like. Ad revenue helps, but your support will truly make a difference. (Please note that we are not set up as a charitable organization, so donations aren't tax deductible.) Thank you!

This website uses cookies to improve your experience while you navigate through the website. Out of these, the cookies that are categorized as necessary are stored on your browser as they are essential for the working of basic functionalities of the website. We also use third-party cookies that help us analyze and understand how you use this website. These cookies will be stored in your browser only with your consent. You also have the option to opt-out of these cookies. But opting out of some of these cookies may affect your browsing experience.
Necessary Always Enabled
Necessary cookies are absolutely essential for the website to function properly. These cookies ensure basic functionalities and security features of the website, anonymously.
Functional
Functional cookies help to perform certain functionalities like sharing the content of the website on social media platforms, collect feedbacks, and other third-party features.
Performance
Performance cookies are used to understand and analyze the key performance indexes of the website which helps in delivering a better user experience for the visitors.
Analytics
Analytical cookies are used to understand how visitors interact with the website. These cookies help provide information on metrics the number of visitors, bounce rate, traffic source, etc.
Advertisement
Advertisement cookies are used to provide visitors with relevant ads and marketing campaigns. These cookies track visitors across websites and collect information to provide customized ads.
Others
Other uncategorized cookies are those that are being analyzed and have not been classified into a category as yet.
SAVE & ACCEPT
%d bloggers like this: